About the Othello, Washington Area

As real estate agents, we have serviced the greater Othello and Columbia Basin area for the past 19 years, providing a service of excellence in residential, farm, new construction and commercial properties.

We provide listing and selling services to larger towns like Moses Lake, Ritzville and Othello, as well as serving Lind, Connell, Warden, Royal City and other neighboring communities.

Othello is an agricultural-based community with a population ranging between 6000 and 6500. With its warm weather and friendly people many are discovering that Othello is a pleasant place to live.

History of the Moses Lake Area

Chief Moses was born in 1829. He was the chief of the tribe of Indians inhabiting this area. They were called Kowalchina and sometimes Sinkiuse and Columbias.

The history of our community began in 1910. It was then that the hamlet of Neppel was founded to serve the needs of a small group of pioneering farmers who settled on the shores of the lake. During this time there was no domestic water supply and no sewers. The streets were unpaved and there were no sidewalks.

The year 1938 brought changes. It was in that year that U. S. Highway 10, a former transcontinental highway, was built through the town. Also, in September of 1938, by a vote of 71 to 41, the residents of Neppel voted to change the town's name to Moses Lake. Even with its new name and incorporated status with a Mayor/Council form of government, the population of Moses lake in 1938 had only reached 302.

The first real spurt of growth came with the war years in the early 40's. The U. S. Army established a Bomber Training Base. In 1948 this establishment was renamed Larson Air Force Base and became a multi-million dollar military installation. By 1950 the population of Moses Lake had suddenly increased to 1,679.

In 1959, by a vote of the people, Moses Lake adopted the Council/Manager plan. As provided for under the laws of the State of Washington governing council/manager governments, the Council is the legislative body of the city. It is charged with the enactment of all ordinances governing the conduct of city affairs and determines policies for administrative guidance.

The City Manager, on the other hand, is appointed by the Council and must exercise supervision over all activities of the city. He is appointed on the basis of his executive and administrative capabilities. State laws limit his authority and he is employed for an indefinite term at the pleasure of the Council.

The city has experienced moderate growth over the years. In 2001 the city's population nears 16,000. As a result of the city's growth, it has become known as a commercial, recreational, and service center for the entire area.

The Community of Opportunity!

The City of Warden is located in Grant County on the Columbia Plateau of Central Washington state. Warden has a population of 2,605 residents and total land area is 2.2 sq miles. The population has steadily grown over the past two decades. The population of Warden was 1,639 in 1990.
A quiet community, residents can enjoy a friendly atmosphere with close proximity to outdoor recreation and reasonable travel to urban areas. Warden is agriculture related and this continues to provide the thrust for the economy of the area.

With a population of just over 4,200, this vibrant, progressive community offers a quality of life that is rare today. Guaranteed to raise your spirits and lower your blood pressure, it’s a place where people know their neighbors, where no one is a stranger, and where the whole community comes out to support the local schools and athletic programs. It’s a town where people don’t just talk about values—they live them.

Connell offers something for everyone. Whether you are into rock hunting or antiquing, biking or taking in a movie, this town has it all. The city takes special pride in its extensive system of well maintained parks, community pool, community center, and excellent athletic fields. Other attractions include the Connell Heritage Museum, the North Franklin Fall Festival, the Spring Fling, and the Wine and Brew Fest, to name just a few.

Connell is a great place to raise a family. A strong sense of community is evident everywhere—from people who have lived here all their lives to those who grew up here and returned to make it their permanent home to those who relocated here and now call it home.

If you’re in the market for a place to visit or relocate, take a closer look at Connell. We think you’ll be glad you did!

HORIZONS is about movement and change: from waiting to leading ... from talk to action ...from poverty to prosperity ... from a few to many ... from despair to hope ... from indifference to price.

Local facilitators completed Royal Roundtables in March and part of the requirements for Leadership Plenty. Strengthening the Heart of Our Community is people of all ages working together to make our community better. We care about everyone who lives and works here. We care about businesses, families and children, jobs and education. Everyone is welcome. 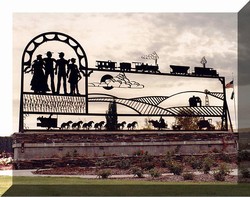 The town of Lind is located in the Lind Coulee off of U.S. 395 in Eastern Adams County. A small community driven by agriculture with emphasis on a rural life style. Lind is well known for the annual Combine Demolition Derby, which has grabbed the attention of several major publications and cable television. Other Lind events include: Lighted Christmas Parade, Family Fun Fair, and the Community Yard Sale.

Ritzville is primarily agricultural community of just less than 2000 residents and a warm and welcoming place to return to small town living within a reasonable commute of Spokane, Tri-Cities and Moses Lake, Washington.
Ritzville lies at the intersection of Interstate 90 and Hwy 395 along with sitting between main lines for the Union Pacific and Burlington Northern Sante Fe Railroads.  This placement makes the community a fantastic place for future placement of any type of transportation dependant business.
Ritzville also is the county seat of Adams County.

Situated on a level piece of ground in the bed of the Grand Coulee, the picturesque, and perhaps one of the most interesting of the small communities in the Grand Coulee area from a historical point of view lies; Coulee City, Washington.

Area lakes, their species of fish and seasons include:

Banks Lake - Trout, Walleye, Crappie, Perch, Large & Small Mouth Bass, Kokanee, Whitefish. This large lake is open to fishing year-round for those who want to take advantage of an early season, or when the weather cooperates, ice fishing.

Blue Lake - Trout. Season open from the last Saturday in April through October 31.

Deep Lake - Trout. Season open from the last Saturday in April through September 30.

Jameson Lake - Trout. Season open from the last Saturday in April through July 4th, and then open again the month of October.

Perch Lake -Trout. Season open from the last Saturday in April through September 30.

Opportunities Unlimited! Quincy is located near the center of Washington State just 10 miles North of I-90. Quincy is the gateway to the Wenatchee Valley, Leavenworth and the Okanogan Valley if you are traveling from the South or East.

Tourism is a major part of our economy. The Gorge Amphitheater, which draws an estimated 3,000 to 20,000 people per concert, is located 10 miles southwest of Quincy. Sunland Estates summer homes and the Crescent Bar Recreationarea all add to our tourism along with the already available hunting, fishing, and boating. We can call Quincy a tourist and recreational paradise.

Our economic base is provided by agriculture related industries (processing, shipping, storage & supplying) with over 200,000 acres of irrigated land under production, all types of seed and vegetable, crops are grown along with large acreage's of soft fruits. We receive our electricity from Grant County Public Utility District(PUD). Cascade Natural Gasprovides the citizens with the option for natural gas. We are on the main line of the Burlington Northern Santa Fe Railroad with approximately 24 trains daily. Presently the City has several large processing plants, that process fresh vegetables, potatoes, apples, and soft fruit.


The City of Quincy has a population of 6,220 with a rural community total population of approximately 13,000. City facilities include a Library, Aquatic Center, six parks with picnic sites (two parks have covered picnic shelters) and a museum. The surrounding cities provide for an increase in tourism around the area. Ice Age Floods and the Columbia River Basalt Flows helped form the geology of the surrounding area making it a fun place to hike, explore and climb.